FutureBeacon.com
Click on any indentation to reach Google.
Chapter 2
Sound
The technology of musical performance and sound production can be improved immensely. To appreciate the vastness of this opportunity, some of the most basic features of sound and hearing must be explained.

When a note having a frequency of 440 cycles per second is played on a saxophone, and then the same pitch is played on a trombone, the two sounds are very different from each other, despite the fact that the consciously perceived pitch is the same.

We identify the source of sounds not only by the pitches we perceive, but also by the quality of the sound. This quality is variously called the tone, or timber, or tone quality, or tone color. This phenomenon of perception is explained by the fact that the 440 pitch is not the only sound being produced by these two instruments. Unintuitive and surprising as this may seem, their are other sounds produced by these instruments that are not consciously perceived as pitches.

The explanation of this phenomenon requires a discussion of air vibrations of a particular kind called sine waves. Here is a picture of a sine wave:

The frequency of a wave is the number of times it completes a cycle in a specific amount of time. The amplitude of a wave is the amount of pressure difference between compression and ratification caused by the wave. If the graph of all of these instantaneous pressures is the shape seen above, the wave is a sine wave.

Complex sounds have distinct tone qualities. Many natural sounds, and the sounds made by musical instruments and voices have a pattern, despite their complexity. They are comprised of a multitude of sine waves where the frequencies of these various sine waves have a strict mathematical relationship; but where the amplitudes of these various sine waves can vary greatly from one source to another. The one consciously perceived frequency of a musical sound is the lowest frequency emanating from the source. Every other frequency is an integer multiple of this consciously perceived pitch. This series of pitches is called the harmonic series.

Musical instruments and sound sources in general typically do not vibrate the air with a waveform that is a sine wave; however, any vibration is identical to some number of sine waves vibrating the air simultaneously.

The saxophone and the trombone produce the same collection of sine wave frequencies when they are both playing the same pitch (such as 440 cycles per second), but the amplitudes of the sine waves are different. Each produce the series 1 times 440, 2 times 440, 3 times 440, 4 time 440, etc. Each of these frequencies are part of the sound quality. The are called partials. The list of amplitudes associated with the partials of these two instruments are different from each other. The second or eleventh partial of one instrument need not be identical in amplitude to those of another instrument. These differences in the amplitudes of the partials accounts for the perceived difference in tone quality between different instruments and different voices.

The forgoing is the correct model for ideal musical instruments that are not percussive and do not suffer from design flaws. I find no merit in the phenomenon of stretch, for example. A metal string that is not sufficiently long and is stiff will produce a series of overtones that compromises the exact integer multiple relationship between the first partial and each of the others. Each higher partial is very slightly higher in frequency than the relationship described above. One can get accustomed to anything associated with pleasant music; but if stretch did not exist in low-cost pianos, for instance, the world of music would do well without it.

Frequency and amplitude are not the only attributes of a sine wave. The following illustrates what is called phase. 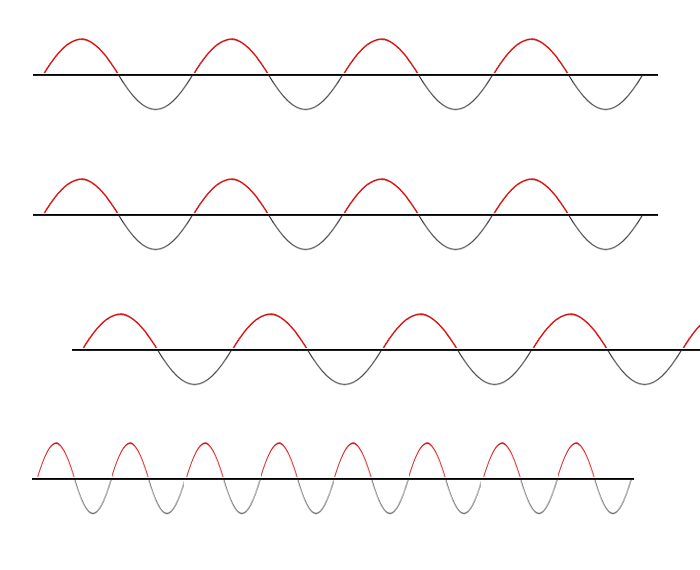 A waveform having integer multiple frequencies as described above may have any shape that assigns one and only one air pressure to each point in time. Any search engine will illustrate a great many such waveforms.